The second season of the Festival of Light 2016 was held in the ensembles of St. Isaac's and Senate Squares. There, in the very heart of the city, world famous architectural masterpieces became the venues for amazing performances of light and color: St. Isaac's Cathedral, the Mariinsky Palace, the monument to Nicholas I, the monument to Peter I (The Bronze Horseman), as well as the Senate and Synod Building.

The project embodied the best European experience in lighting design and 3D-mapping technologies and turned the festival into a truly St. Petersburg brand with a special recognizable style, consonant with urban traditions and the soul of the city. Over the two evenings, inspired by the work of geniuses of different eras, the performance directors and artists helped each viewer to rediscover and fall in love with their own perception of St. Petersburg.

The projection performance Revived History at St. Isaac's Cathedral was dedicated to the history of the St. Petersburg appearance formation and the citizens’ mindset. The audience saw the stories about the creation of the greatest spiritual culture monument in Russia, whose mission is truly unique.

The magic beams of projectors in the 3D light performance named Space Between the Sky and the Neva revived the memory of St. Petersburg-Leningrad on the Mariinsky Palace facade, its myths and real events that largely determined the fate of the country. Episodes of the play is the legend about the city founding and the eagle descending from above; the erection of the city of St. Petersburg and the formation of Russia as a maritime power; whirlwinds of high society balls; the dark nature of the Neva and the flood of 1824; riddles of sphinxes and ghostly lace of fences; revolutionary Aurora; the penitent angel on the spire of Peter and Paul Fortress and the black arrows of the blockade ring on the Leningrad map; the ominous darkness of the winter blockade night and the enduring will to live; spring in the Summer Garden and May downpour; the open communal apartments’ windows, courtyards and puddles into which the sky falls; an era of change and autumn leaves underfoot ...

In addition to the vivid video sequence, the authors of the mapping on the Mariinsky Palace facade paid special attention to the musical score, consisting of fragments of classical works of different eras and styles: Tchaikovsky, Prokofiev, Stravinsky, Schnittke, Beethoven, Mozart, Schubert. Lyrics by A. Pushkin, V. Mayakovski, A. Akhmatova, N. Gumilyov, O. Mandelstam were performed by the People's Artist of the Russian Federation Nikolai Burov and the Russian theater, film and dubbing actress Anna Geller connected musical and imaginative narration into a single multifaceted text that created a mystical and spiritual vibe spirituality introducing the viewer to the magic of St. Petersburg. 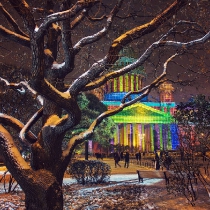 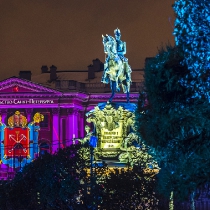 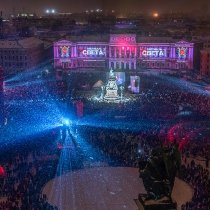 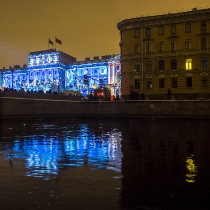 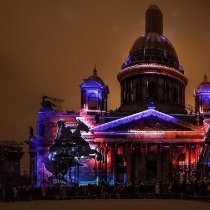 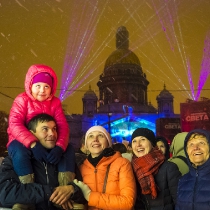 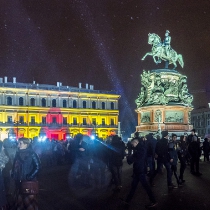 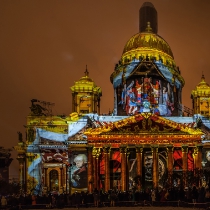 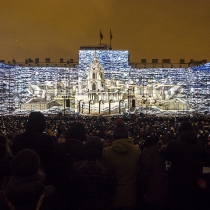 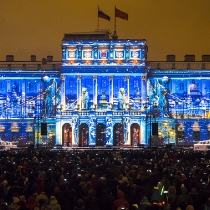